The PLASTINUM GIM C system that was developed by Linde und Maximator uses carbon dioxide (CO2) for injection moulding (GIM) and is being used in series production for the first time. The two companies announced this in a statement at this year’s Fakuma plastics exhibition. The company Engel Formenbau und Spritzguss GmbH, which is located in the town of Sinsheim in Baden, began using this procedure in summer 2015 to manufacture high-quality plastic handles, and has been able to reduce cycle times for the production of a refrigerator handle by 36 percent. 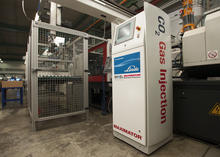 PLASTINUM GIM C is the result of the latest joint development project by Linde and the high-pressure specialist Maximator. Both companies share an exclusive technology partnership in the plastic applications industry. The core of the new technology (patent pending) is a carbon dioxide compressor control module for precise pressure regulation directly on the machine. The system also stands out thanks to its dedicated carbon dioxide injector. The adjustments focussed on details, so that it was possible to convert an existing GIM-injection moulding machine from nitrogen to carbon dioxide with little modification to the injectors and without modifying the tool geometry at all. It took just less than four weeks to implement the process switchover at Engel in Sinsheim including all tests and optimisations. The carbon dioxide is supplied flexibly from cylinder bundles.

Gas-Injection-Moulding (GIM) has proven valuable especially when handling thick-walled parts, complex contours and shiny surfaces. This method involves injecting gas under a high pressure into the polymer melt to create a defined hollow space in the injection moulding part or a specific area of the part. Usually nitrogen (N2) is used for this process. Users of nitrogen-injection-moulding systems usually have to live with longer cycle times because nitrogen plays an insignificant role in the cooling process and the mould is practically only cooled from outside. Despite the shorter cycle times, water-injection-moulding, which has been available for a few years, has only been able to establish itself in a few niche applications because the process is more complex and the necessary hardware is much more expensive; also, the unavoidable leaks lead to production stoppages and higher scrapping rates.

The increasingly strict efficiency requirements make this new procedure with carbon dioxide (CO2) highly interesting: CO2 has a much greater cooling capacity than nitrogen. The reasons for this are its much higher density and higher specific thermal capacity plus the high expansion cooling capacity during depressurization at the end of the cycle. This allows the part to cool much more quickly. Carbon dioxide technology not only requires a suitable carbon dioxide supply, it also needs CO2-suitable pressure control modules and gas injectors that are optimised for CO2.

To establish the actual potential of carbon dioxide in GIM systems, Linde und Maximator designed a pilot system that was used at the company Engel to conduct extensive practical tests under real conditions. A direct comparison of carbon dioxide and nitrogen shows the following: The quality of the result remains high, however the cycle time is reduced by approximately 36%. In summer 2015, the System PLASTINUM GIM C that uses carbon dioxide in the injection moulding process was installed for the first time in a series production line. After the overwhelming positive experience with this technology, the company is now planning a follow-up project with CO2 that Maximator and Linde are currently working on.